Let’s assume you have decided to remove some lawn grass and replace it with something else. And, having read parts one and two above, you aren’t scared off by a change in the work you’re now doing. Because it isn’t that you are suddenly doing a lot of new work—you’re simply doing different things (unless you pay people to do your yard, in which case I can almost guarantee you that over the medium term getting rid of lawn will save money).

A typical first step is shown in the two pictures below. We know a lovely young lady who bought a home in Baltimore and wanted to change the yard (at right) from all grass, ivy crawling up the fence (and killing the azalea bush seen here). She wanted to see birds, butterflies and bees busily pollinating flowers. But, even though this was a quarter acre yard, taking the whole thing on at once was a daunting task (even with the two of us helping out). The portion shown here is an area that gets 6 or more hours of sun every summer day. 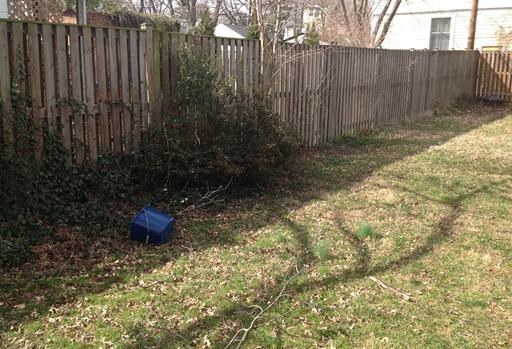 We marked the area now shown as flower/shrub bed with a hose and sprayed glyphosate to kill everything out to about 3 feet from the fence. All the ivy and invasive vines were cut and pulled from existing azalea, cherry tree and fence. A 5 inch trench was dug to put in the plastic edging in smooth curvy lines (nothing’s straight in a real forest). A dozen plant types were put into the area. Black-eyed susan, ironweed (Vernonia), Joe Pye weed, lilies, bee balm, wild ginger, a holly tree, and a new black cherry tree. Compost and mulch were applied. The bird feeders (foreground) were mobbed by birds, but overtaken by squirrels, so squirrel guards will be needed. There is a compost bin at the back in the shade under a Japanese cherry for all the green/brown materials that were removed (see “How to do composting the easy way”). 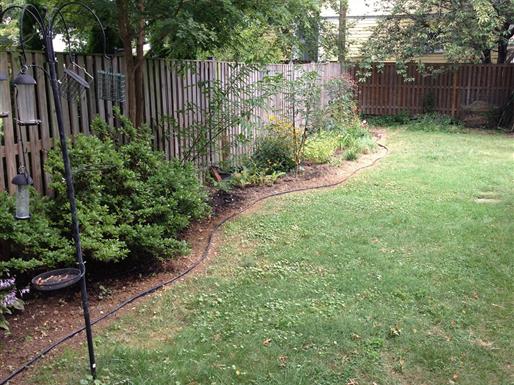 No landscape architect. No city permits. The neighbor can’t see this area until you invite her in—and when she did see it, the next door lady wanted to know if we could do this for her. It’s your property and you can mostly do things like this in a couple of weekends. In this same yard, there’s a metal garage that now has native wisteria and trumpet vine covering it (growing 8 feet in one year) and perennials growing in front, a vegetable/herb garden that produced strawberries, and raspberries, and herbs instead of crabgrass, a forsythia hedge started (with black plastic over the grass in that zone), a native Rhododendron, and a “found” dogwood that was encased in vines with dead limbs that bloomed gloriously this year.

The new trees will take some years to become more mature. And, some of the new plants will die, or at least not thrive. Others will overgrow their neighbors and need thinning (or better yet, pot them up and give them away to others for free as we do). New plants need more water than established ones. Our rule is that after a couple of years if the plants can’t survive a dry spell, that’s their problem. But, newbies (like young children) get a pass, and you will need to be out there with a hose or, better yet, a dripper hose to give them a nice start. That’s a hose with tiny openings that slowly release water directly onto the soil around new plants. You can turn it on for an hour or two at a time, or, put the whole thing on a timer that turns the water on and off on a schedule.

Ask yourself: What do I want to look at as I enter and walk through my yard? What’s there now that’s good and what needs to be removed? How much effort is it going to be to change things? What can I afford to do this year in terms of time and money? Get advice from knowledgeable friends, local garden clubs, the country extension service, and web crazies like us. We’ve now had people send us cellphone pictures of their yards and worked from there to make suggestions. Don’t bite off the whole enchilada at once. But start something now. You will be the winner.

Noah’s Garden. Restoring the ecology of our own back yards. Houghton Mifflin Co, Boston, 1993.
​ A lyrical book that details how she stumbled along making her yard more like a natural outdoor woodland.

One Response to “Lawn Gone! Part Three—What Do I Plant Instead of Grass?”