All gardeners in suburban sites and even those inside city limits know that the deer are second only to El Qaeda as a threat. Before PETA comes after us, we’re animal lovers, but reality is there’re too many Bambis for their own good (and our forests and gardens). Deer-vehicle accidents resulted in more than $3.8 billion of insurance claims and driver costs last year, according to State Farm Insurance. Such collisions caused 140 human deaths (National Highway Traffic Safety Administration). Baltimore, like many cities, has 100 deer per square mile, 40 times the number in 1900. This post will help you deal with deer on your own property, without dealing with the true solution, lowering the population.

It got personal for us when a herd ate several shrubs all in one night in our garden. The U.S. forest understory is now absent up to 6 feet in height. Deer will eat anything if hungry enough, so don’t look for a list of “deer resistant” plants. You shouldn’t be limited to a few plants and frankly that wouldn’t help the environment be more natural anyway. It needs a variety of low, middle and high plants/shrubs/trees, regardless of the deer palate. I’ll also not give suggestions about killing deer, though contraceptive methods have failed, and someone or some animal will have to be a predator for them sooner or later. In the very cold winter of 2013-14, many deer starved, so it isn’t always the most humane strategy to leave them to their Malthusian overbreeding. Increasing safe hunting, local culling, and reducing any free handouts are the province of specialists and local governmental regulation.

The Best Answer: Fence the property. We’ve heard all the arguments against fences. Ugly, expensive, ineffective, illegal, and high maintenance. First, you do need to know what is legal in your area, as there are ordinances and local rules about fence. Most communities have a majority of homeowners who have the “deer problem” so agreeing among the neighbors about what you’ll do is useful. First, select the area you want to protect. For most it will be the back and/or side yard, not the front on the street. Except at our house, where our front was planted as a woodland and a nearly 7 foot brown aluminum fence is almost invisible.
You should select something at least 6 feet high, 8 feet is better, though they can jump either from a standing start if there’s clear view on both sides. It can be strung from tree to tree or with steel angle iron posts 1 foot longer than fence height. Commercial fencing is very expensive in iron or aluminum but if you have the money do that, as long term maintenance is lower. 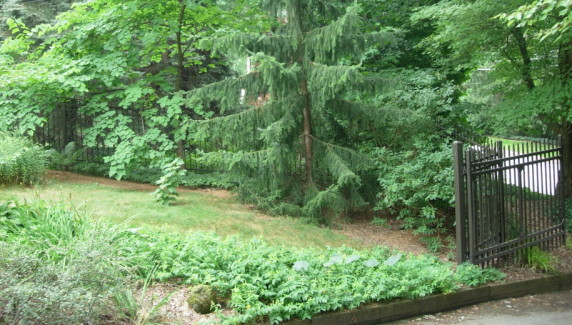 note the gate on the driveway at right

If it is esthetically in line with your yard, use an opaque design they can’t see through. They won’t jump if they can’t see the other side. If you put the fence among evergreen shrubs and trees that serve the same opaque purpose (and supplement the planting over time), the fence can be “open” design. If not an expensive commercial grade fence (and especially if you are fencing a large area), use the heaviest grade nylon mesh deer fence purchased on line 8 feet high. It should be reinforced with 14 gauge galvanized steel at the bottom, the top and a third line in the middle and anchored to the posts and trees. You’ll need to arrange either a gate (available also on line), or a U-shaped opening that you can squeeze thru but they can’t. If it is too difficult to fence all the property then pick a part that you can defend, and fence that. We tried nylon line instead of fence and they snapped it without slowing down. 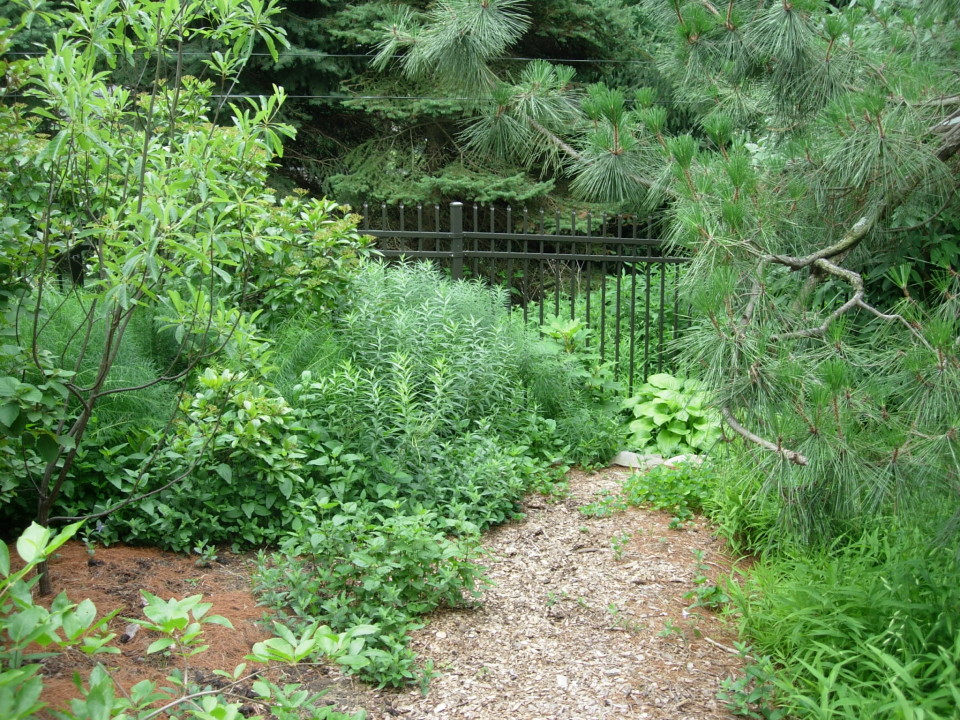 The nylon fence is pretty unnoticeable if it’s among trees and shrubs which is the best location—you want them not to be able to see the other side, and they will not jump. So you and they know the fence is there, cut some white plastic bags into strips and tie them at deer eye level in some spots where they were known to meander through. 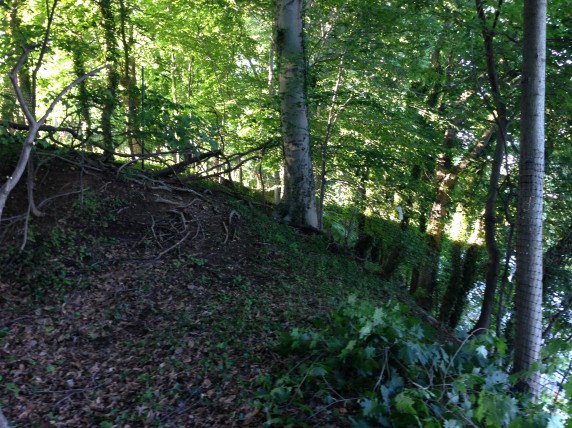 You can see their paths worn through low plants as they like to walk the same path over and over (easier in the near darkness they prefer for early morning and late evening strolls—they hunker down in the daytime). Easiest time of year to figure where they like to walk is winter, or just after a rain on muddy ground. Some people have recommended two fences only 4 feet high and 4-6 feet apart, claiming they don’t like that arrangement. You can’t leave the driveway open to them as they’ll just mosey on in there. 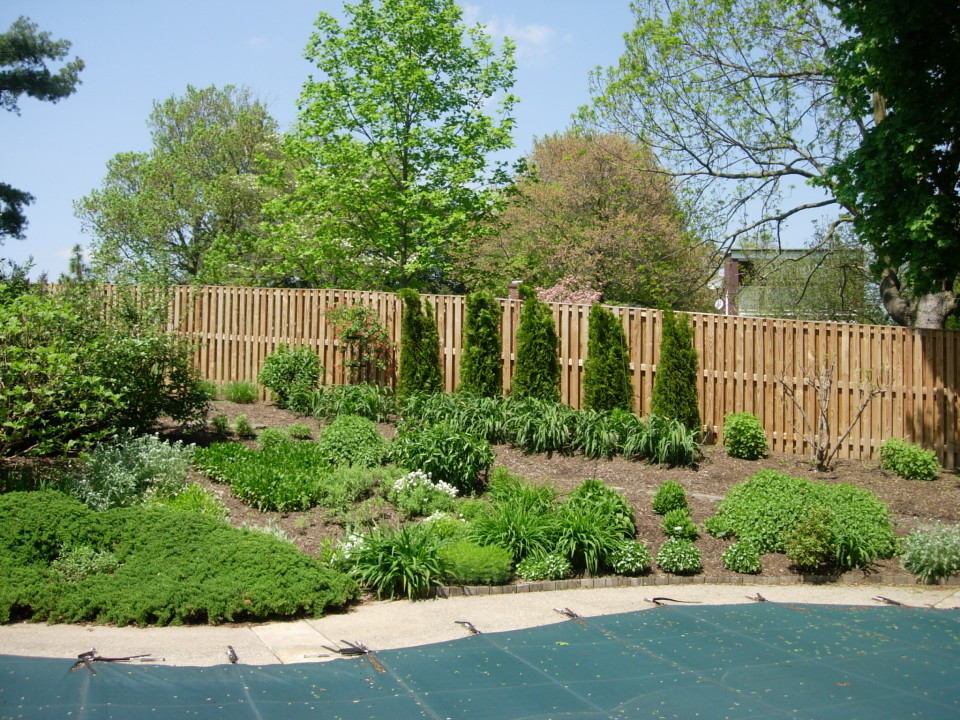 The Second Best Answer: Hot Pepper Spray. There are a number of products on the market available at big box stores and on line whose main ingredients are hot peppers and eggs. The egg is for the binding of albumen in the egg white to hold the taste on the plants for a month or so, even when it rains. Without that, you’re spraying in the wind trying to get out there every time it washes away with the rain. We have used the product Bobbex which received recommendations from some State Forestry boards. It comes as a concentrate that is diluted in a plastic pump sprayer (about $15 at the big hardware stores). They have favorite plants and prefer lily flowers, hasta, and holly, but pretty much anything is fair game. If plants are growing rapidly, you will spray more than once per month to protect the new growth. First time we used it in our Park, a couple hasta leaves were munched off, and dropped straight on the ground, showing how much they dislike the taste. It is said that they will accommodate to the taste and it’s only a temporary answer or one for low predation levels.

All Other Answers: Forget it. Blood, human hair, coyote urine, your family dog, ultrasonic alarms, and water sprays. All a waste of time and money in our opinion. Good luck.