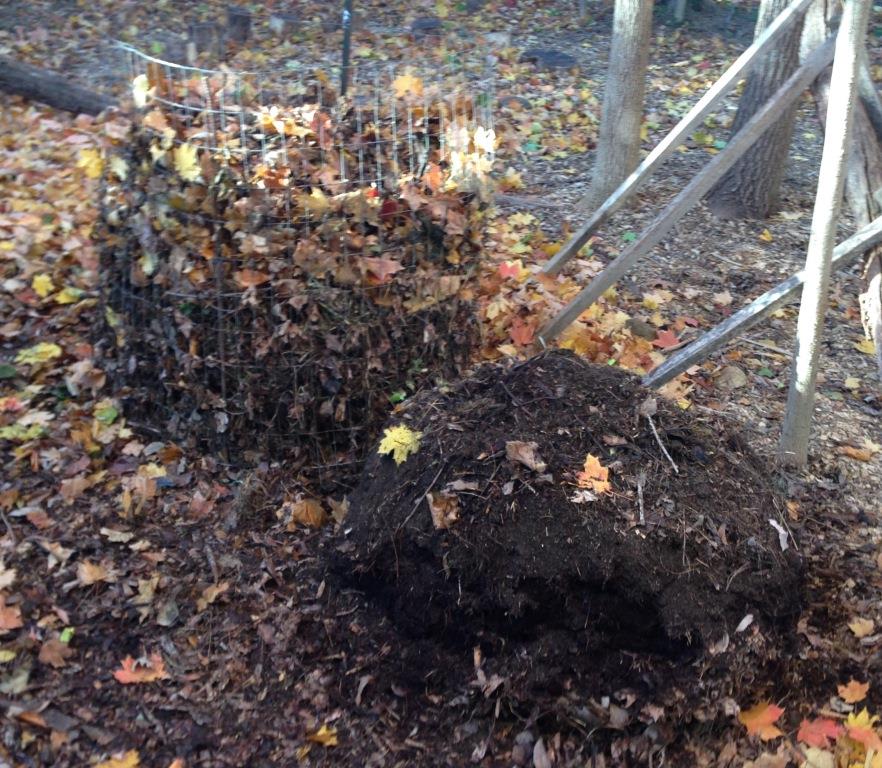 I bet you hate to bag leaves (see Post called Leaf Them There). And isn’t hauling out garbage cans fun? How about trying to stuff deadheaded flower stems into a can for the trash man? Or wasting water and energy running a garbage disposal? The answer my friends isn’t blowing in the wind, it’s a simple ring of fence material in a back corner of your yard: a compost bin.

More and more we see demonstrations of composting at nature centers. Some are elaborate plastic lid-covered ones that rotate, or, wooden fence, box-shaped ones that look like they’d take weekends to build. I have a better solution, that works great and costs less than $20 to build. Lasts 4-5 years and is lower maintenance than any other method.

One buys 4 foot high, 14 gauge, galvanized steel fence that comes in rolls of 25 or 50 feet. Buy the type that has about 1 inch by 3inch rectangular spacing. And, you’ll need 4 lengths of steel rebar each 6 feet long (try to have the hardware people cut these for you, or use a hacksaw to make them from longer pieces). For a compost bin 6 feet in diameter, cut a 19 foot length of fence with wirecutters or pliers. With each cut, leave a segment of wire sticking out to bend over the end of the other edge of fence to make a cylinder. There’ll be about 25 of these to twist over.

Plan to have two 6 foot diameter, flat zones on the ground next to each other. Pick a location that’s generally not in direct line of sight from your house or the neighbors, though this type of bin is pretty unnoticeable. Stand up the cylinder in one of these two zones and pound the 4 rebar poles in a square pattern, against the inside of the bin wall, so their tops are flush with the cylinder and keep it stable. 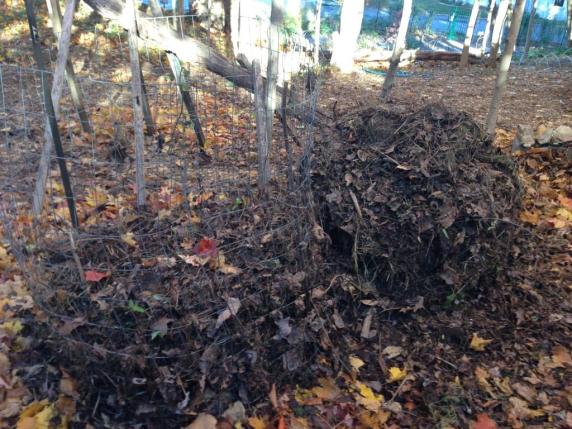 You’re now ready to start filling it with goodies. Later, you’re going to move the cylinder to the other zone next to this. There is no wrong way to put compost in, but there are ways to make it “cook” better and develop usable compost faster.

Material in a compost bin starts as leaves, deadheaded stems, grass clippings, fireplace ashes, weeds, and kitchen scraps. The idea is to get the material to turn into soil and a good finished product has modest amounts of nitrogen to feed plants and a lovely crumbly black consistency that holds moisture. You can mulch with it, mix it with soil for new potted baby plants, and mix it in the dug hole for new shrubs and trees. We don’t recommend putting invasive weeds, ivy, etc in the bin, as these may not be killed if it is not hot enough in the pile and you may later be replanting them all over again. The heat is supposed to kill seeds, but this doesn’t always happen.

To get from starting material to finished product, we need a good mixture of green and brown material, bacteria and fungi that “chew” the material, moderate wetness (not soaking wet and not crackly dry), air holes (we want aerobic bacterial action), and enough height in the pile that the central portion begins to hold in the heat generated by the bacterial/fungal action, say 120 degrees Fahrenheit or higher. The height of the 4 foot fence gets the pile hot enough when full and isn’t too hard to reach over the lip to throw stuff in.

As to water, if you’re going through a dry spell, pouring a bucket of water over the pile once a week helps. It’s always wetter in the middle, so put the water on the outside. As to air, the fence material holes on the outside help there. For the middle, use a rebar pole to jab down 2 or 3 feet into the pile from the top to let air into the center in about 10 places.

You’ve probably heard you have to “mix”, turn, or rotate the compost pile. This is why they designed the rotating ones. Mixing does speed it up, but I never do that, since I prefer low effort methods. When you pile up enough stuff to fully fill the bin, watch how it compacts right back down over the next week or two. The bugs are doing their stuff and the weight of the upper stuff pushes down the bottom layers. Soon, you can add more goodies to the bin again. I often overfill and watch it squish back down multiple times in a season.

Instead of mixing, I alternate what is being put in by layers. If you fill it all with dry brown leaves, there’s not enough diversity of stuff to dissolve quickly. They’ll just sit there as a dry mat for months. Consider alternating layers, not more than a foot thick, of green grass clippings, brown leaves and stems, and kitchen scraps. We don’t put bones, meat, stonefruit pits, corncobs, or fatty grease in the bin, but everything else from the kitchen is put every day into a covered metal container that has a plastic bag lining it (the kind bread comes in). That’s carried to the bin every other day and spread as a layer. Every few layers, take some finished compost or moist garden soil and make a fine layer. You’re adding the soil bacteria that do the cooking. This is sold as expensive compost “starter”, but you don’t need to buy that, since my solution is as cheap as dirt.

By layering, you avoid having to turn or mix the pile. Within one season, by repeatedly filling and watching the pile compact down, you’ll have a dense pile 3 feet or more high that’s ready to harvest. Pull the rebar poles straight up and out, then lift the bin. It will seem very resistant at first (Quigley! What did you get me into?). Just lift an inch or two all around (don’t put the bin dead against the garage or fence—you’ll need to at least walk around it). Then, lift another inch and another and soon it comes free. You and a helper if you wish then drop the bin into the second 6 foot circle area next to the pile, with the ground level under it. Replace the 4 rebar poles to stabilize it.

The outside material will still look unfinished and this you pull out with gloves on and drop into the bottom of the now empty bin next to it. In doing this, mix dry brown stuff with wetter stuff, break longer stems of perennials in pieces, and throw occasional layers of finished compost on. Soon, you’ll come on the black gold, the finished compost in the first bin area. I just leave it right there, ready to use. So, you always have a bin being filled and a finished pile of compost. Our yard is large enough that I have 3 of these bins and I keep two next to each other, occasionally emptying one into the other and removing the finished compost at the bottom to a separate pile.

What about animals? We are often asked about “attracting rats”. If you can find an urban area of the USA without rats, you’re probably underwater. They live everywhere. Yet, you won’t see them since they don’t like us that much—just the stuff we leave around for them to eat. We’ve never seen a rat in our compost piles despite all the kitchen scraps. Now raccoons are another story. You’ll see evidence they’ve picked through the food and like particularly melon and citrus rind, and egg shells to lick. Again, urban America is loaded with raccoons, who are out at night and you will rarely see one except in outdoor night lighting. Our fox hunts rodents and always tracks past the compost as a fast food location for critters to munch. Good hunting, beautiful Monsieur Renard.

2 Responses to “Compost made easy”