If your project is like ours, the choice of plant material is pretty scary, especially when you’re staring at bare soil. On the one hand, we wanted to get things planted quickly to avoid erosion. On the other hand, our experience has been that it’s easy to make mistakes: doing things in the wrong order, putting plants in places where they won’t survive, or failing to have a good mix of the parts of a woodland garden at all heights.

We had first put in the trees, since their size and planting holes require a lot of space to be carried or dragged across the property. Small guys already planted would be smooshed by the traffic of the tree planting. For the same reason, shrubs should go in next, though depending on your newbies, they may not be that big.

The majority of shrubs in an Eastern woodland are deciduous, and we were looking for a variety that were friendly to birds, bugs, and humans. But, practicality enters very quickly when you’re on a budget. We had obtained a grant from Baltimore’s wonderful Parks and People foundation () to pay for the trees, and for initial materials. We were on our own to raise the money or scrounge for how to pay for the rest. 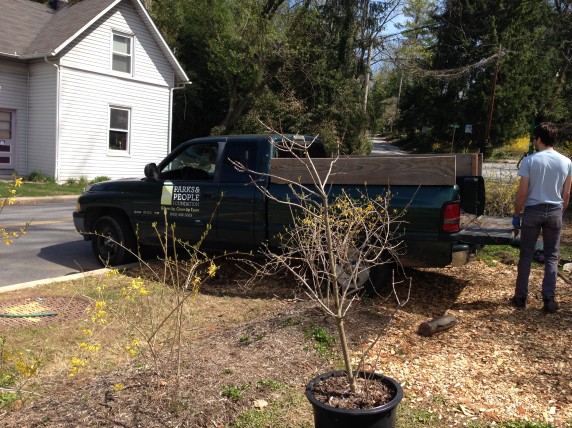 Fortunately, our home garden provides many chances to raise baby shrubs and perennials, and we have often potted up small ones to give away as party favors and to gardens of friends for whom we do consults and make suggestions. One is always welcome arriving with plants (especially if you bring a shovel and do the planting).

The shrubs put into the Park include Clethra (two varieties: Hummingbird and a Ruby Spice given by a good friend), Itea virginica, bottlebrush buckeye, cherry laurel, yew, and holly (Ilex opaca). The former two are just as happy in some shade, so they are on a hillside out of direct sun, while the others will hopefully thrive with full sunshine (at least the 4 hours we get in the park, given the existing tree cover on the east). Remember that as the trees and large shrubs grow, they will change the sun—shade zones. Below you see 3 blooming Itea on a shady hillside.

Probably the biggest rookie mistake we all make is putting things in too densely at first. When you look at a picture just after we put in 4 dozen plants in early August, it doesn’t look like anything was done. The 10 little sprouts have so much empty space around them. But, check out what these tiny Amsonias will look like in only 2 years—4 feet high and confluent. So if you want instant coverage, put them in densely and thin and cull later. But, the more reasonable approach is to have the patience to wait for babies to grow. You did it with your children and look how that turned out (I hope).

As to perennials, you have so many choices that it’s really what you wish for, what is easily and cheaply available, and what best fits with the soil and sun conditions. Some like the poorest soil and will languish in rich loamy textbook tuff. Others do need some nitrogen, while others are nitrogen fixers and should never be fed. Some will do best in dry shade and others love sunny muck and the wet. Some will grow to 8 feet (Joe Pye Weed) and others top out at 2 feet (Asclepias tuberosa), while others are groundcovers and sneak in around everyone else at toe level (wild ginger).

Get one of the many books on native perennials from the library (or better yet buy your own). As you acquire each plant, read up on it. You can get advice from those at native nurseries—they’ll love to talk plants with you. In the Baltimore area, try Herring Run Nursery, a non-profit with great plants at good prices. 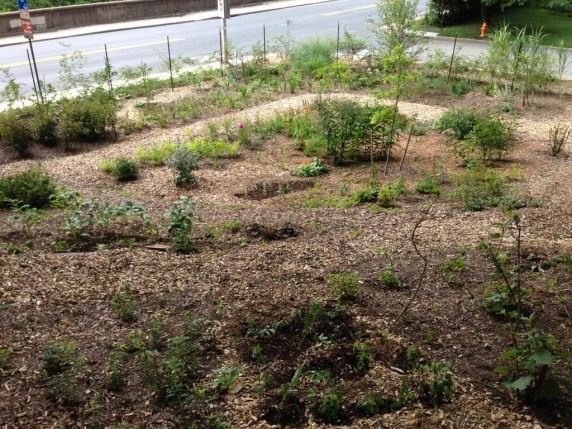 In selecting perennials for our Park, we were challenged by the reoccurrence of invasives whose roots were not fully removed, or, who reseed themselves from nearby locations (ivy and bittersweet) and trees (Ailanthus and black locust). So, to some extent our choice of plants at first was driven by getting rapid coverage with aggressive plants that we know will later need taming, even though they are native and flowering (see “Outsmarting Invasives”).

The list of plants we put in just in one spring and summer included:

Don’t forget the vines. We had 3 black locust trees, with their first limbs starting up at 40 feet off the ground. They were perfect climbing poles for native vines, here illustrating Lonicera (native trumpetvine) on the left tree and Virginia creeper on the right one. The trumpetvine has gone up 8 feet since planting 6 weeks before this. 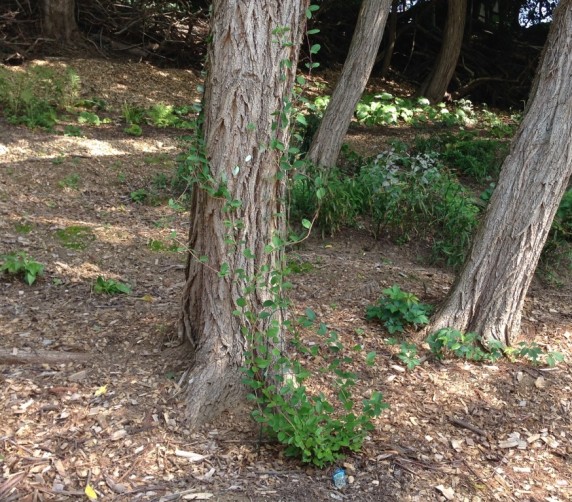