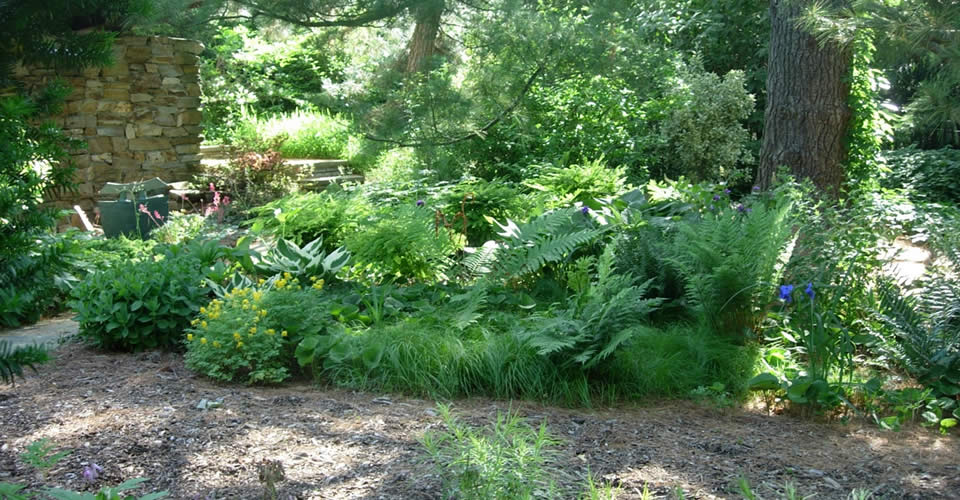 One of the most enjoyable aspects of a garden is having paths that lead from one part of the yard to another, as if walking from one room to another, with a changing view and surprises around corners. This is an idea known since the 13th century and recorded in the first garden book, written from oral tradition in Japan and attributed to Sakuteiki, a master gardener (see Nerd Food). Paths can be made of all kinds of materials, but our favorite is wood chips, freshly produced by a tree company. Grass paths are also durable, but require mowing every week. Wood chips last 3 years if they consist of harder woods like oak. Ask the tree guy what he’s cutting and get on his good side to be listed for a dumping at your house. He has to pay to dump them at a mulch company, so he’ll be delighted to offload on your driveway. As compared to grass paths, no noisy lawn mower and gasoline air pollution involved. No trips to fill the gas cans or to sharpen and tune up the gas mower.

Chips of any wood are fine as long as they’re fresh and relatively free of leaves and unchopped branches. Two not so aged adults with wheelbarrows and a shovel can haul and spread 10 cubic yards (a good sized dumptruck load) in one or two aerobic afternoons in time for cocktails. If you now have turfgrass that’s well established in the path of the path, you’ll want to cover the grass with black plastic and stones or bricks on top for a month or so to do in the grass first. The less patient types can spray glyphosate from a hose spreader, protecting the plants you want to save on either side with a board held by the assisting partner. Among the ecologically minded no herbicides are acceptable, but glyphosate (it has several brand names) is said to degenerate and leave the environment within a month. 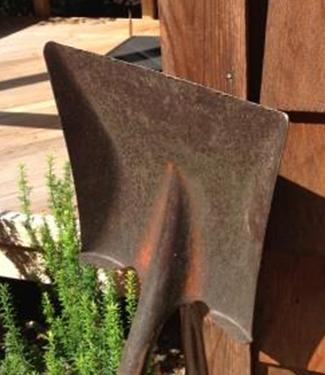 Even aggressive weeds won’t come up through raw wood chips, since they eat up all the nitrogen. So that’s the end of weeding – for years along the walkway. Every 3 years or so, you refresh it with new chips. Beginner’s tip: start by dumping the first wheelbarrow load at the farthest point from the truck dump pile, or start at the bottom of a hill and work backward toward the main pile–fresh chips are hard to walk through or to push wheelbarrows through and will be spongy to walk on for some weeks. Have the arborist dump the pile on an asphalt or concrete driveway unless that is the lowest point in the yard. It’s easier to go downhill with a wheelbarrow load of chips. Use a “coal shovel” type, not a spade with curved blade (Pictured to the right), so that a large amount can be scooped up to put into the wheelbarrow at a time without spilling. Putting them on grass makes it impossible to scrunch the shovel under them and too hard to get into the shovel. When the wheelbarrow arrives at each next site, they can just be dumped or flung.

We now have a quarter mile of paths in a 2/3 acre yard, most of them made of chips, but with some remaining grass path and stone walkways. Chips are especially good for spots where you’ve tried to grow grass (over and over), and despite expensive reseedings (with “shade tolerant” seed and that 30-10-10 Chemlawn tank truck poison that runs off into waterways and the Chesapeake Bay. Chips soak up rain instead of having it wash off, as grass does. We put paths along fairly steep sloping hill sides, building up the downhill side with more chips that uphill and reinforcing the down side with limbs that fall from our trees during the winter or are pruned. Lengths of 6 to 10 feet and diameters up to 3-4 inches are great reinforcers and look natural. Smaller limbs can be pounded vertically along the limb to keep them from moving.

Voila! Our newly spread path on a hill slope is admired by happy birds on the hanging feeder and birdbath. In addition, squirrels love digging in the chips and robins soon mine them for worms and bugs—they’re natural, perfect smorgasbord zones for ground feeding birds. The reconstruction of the natural environment of a woodland with chip paths is not only fun to walk on but make for for bird havens and home to all kinds of helpful insects. 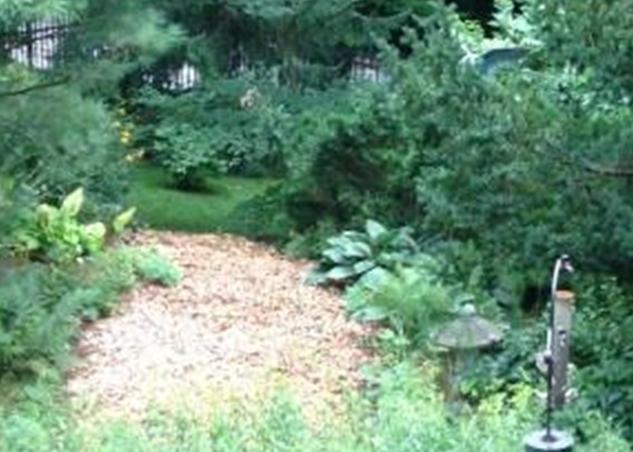 Sakuteiki: Visions of the Japanese Garden.
A modern translation of Japan’s gardening classic.
Jiro Takei and Marc P. Keane, Tuttle Publishing, Boston MA, 2001.
Your historical and esthetic reach into a 1000 year old tradition of gardens, and you will get many ideas you can use in your own yard, as it’s timeless.

3 Responses to “Garden paths: chipping in for the environment”