So, in 1996, we bought the dream home. Large windows looked out into the yard and tall trees ringed it on 3 sides. The former owner said: “The only problem is the grass doesn’t grow well and mowing on the hillsides is tough—I almost cut my foot off several times. Better get ready to spend $$ on a lawn service, and raking the leaves will be how you spend the Fall. We soon knew what he meant, with over 1/3 of an acre of “grass” and 3 dozen trees, in the first 2 years we spent 2 hours a weekend mowing and 4 weekends raking in the Fall—as well as trying to put all the results into dozens of plastic bags. I see it all over my neighborhood.

Sixteen years later, we have a total of 200 square feet of grass left, making up two pathways, and the leaves that fall through most of the yard stay right where they fall. How we got from There to Here is recounted here. It’ll give you an idea of whether you want a yard that is not necessarily less work but more fun to work in. A yard that acts locally to help globally. No pollution. No poison. No engine noise. And more animals, birds, butterflies and other beasts than you can imagine—and we’re inside the Baltimore City limits. Fox, raccoon, possums, snakes (they eat rodents and are more scared of you than you of them).

Step 1: take stock with help. We had a bunch of trees that were spectacular, but no idea what they were. I am an Eagle Scout, but we had an arborist come in December, look out from inside and tell us what trees we had. Which were desirable? Which not so much? The good ones: Tulip poplar 100 feet tall, basswood, red maple, and white ash. The baddies: black locust, box elder, Norway maple, tree of heaven, and under everything English ivy gone wild, crawling 50 feet into the tree canopy and covering about half of the area. If you don’t have an expert, there a lots of volunteer master gardeners and local organizations who will come by and give you advice. Cristina and I have now done this bunches of times.

Step 2: demolition. Like any good construction project, you have to make it ugly to make it pretty. Ivy can be and was hand-pulled out and composted, done in cold weather when it’s easier to work and when all the “real plants” are dormant. Rule 8 of invasives: only the bad plants are green in December and January. We hired a skillful tree company to cut 2 dozen trees flush with the soil. Save the medium-sized black locust limbs to line paths, have them give you slabs of trunk to split for firewood, and they can leave you with the “chips” (see blog: “Garden Paths: Chipping in for the Environment”). These are super-useful for covering denuded zones, and particularly for starting your paths around the yard project. 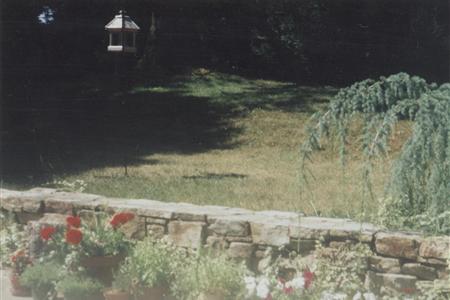 Step 3: plant something where (some of) the lawn was. You can’t do it all at once, unless it’s a really small yard. The first picture, above, shows an area of the back yard in 1996 and then below, the same area in 1998. From a stone wall to a back property line, there had been grass, which died under the maple tree shade (left) and required mowing on a slope in the sun. Two years later, there was a waterfall and a pond with lilies. Frogs arrived from somewhere, goldfish (6 @ $1 each) live in the pond and are never artificially fed (they and the frogs eat the mosquito larvae, and the bats eat the full-size mosquitos at dusk). The pond-builder “tuned” it to make a lovely falling-water sound year-round. 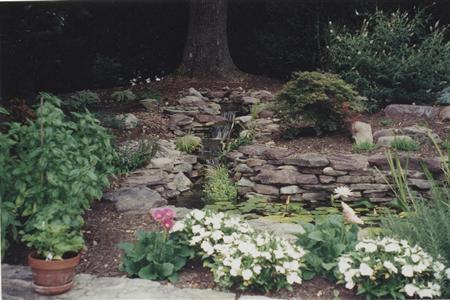 But, replacing grass doesn’t have to be so grand or even expensive to replace. The front yard was a large zone of failed grass under shade with ivy (left, below). Clearly there were better plants that would thrive in the shade on this slope. It was a steepish hill to walk on and if we were ever going to go there (or mow there, ugh), it would take some leveling. The only leveling done was a path, made from the used wood chips when the trees were cut. We substituted for the grass some plants that survive in the shade of the remaining trees: ferns, wild ginger, hellebores, uvularia, ginseng, and epimedium (right below). None needs mowing. The leaves fall where they may and self-compost. By the way, so-called “shade-loving” plants mostly don’t love the shade but at least do well enough there. 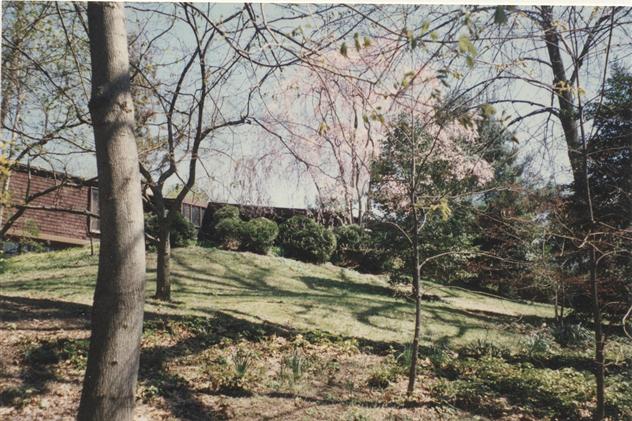 How do you get rid of grass you’re replacing? Depends on what it looks like now and what you’re going to do.Scenario 1: the grass really isn’t growing well in this spot, it’s shady and moss grows there (see above). This is the easy one. Get enough mulch to cover the area 2 inches thick and put shade plantings there (see “What should I plant here?”). Most often, the grass won’t come up through the mulch and your new plants will outcompete it. Don’t buy bags of mulch, get it in bulk, dumped on a driveway (see “Garden Paths: Chipping in…”) and haul it to the location in a wheelbarrow that gets loaded up with a “coal shovel” type. It’s far cheaper that way. Use aged mulch, not raw chips. 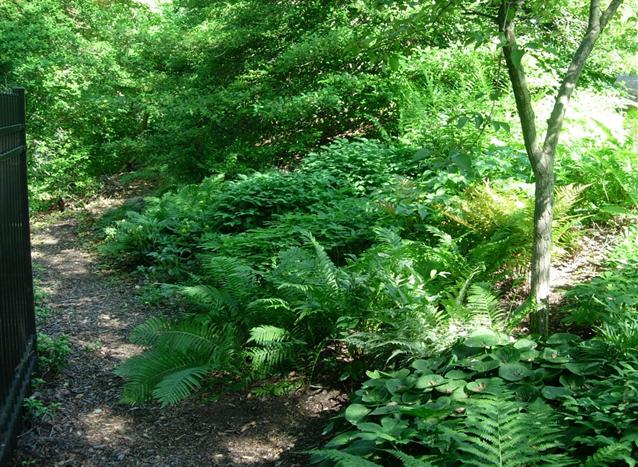 Scenario 2: the grass (and crabgrass and creeping Charlie) are thick and in a sunny area, and you’re going to leave some and remove some. Here, you really want to kill the stuff before planting anything else in its place, or you’ll be pulling it out for years (and killing your new babies as you do). Start by marking out where you want to get rid of the grass with a hose, then stand back and see how it looks. Remember it will look different when there are new plants there. Now, there are 3 choices to eliminate the grass.

1) By far, the fastest—easiest of which is to spray it with glyphosate from a hose sprayer. You buy the concentrated glyphosate, put the required amount in a sprayer connected to the end of your lawn hose and thoroughly wet the area on a sunny day when no rain is predicted for 24 hours. This will kill any plant that it touches. The grass doesn’t die immediately, usually takes a couple or 3 weeks. It works by blocking an enzyme that makes plant proteins and is absorbed through foliage and translocated to growing points, so it’s most effective on actively growing grass. Its average survival in the environment before being broken down to harmless parts is 47 days, and the EPA considers glyphosate to be noncarcinogenic and low in acute toxicity. That said, you don’t want this stuff on your skin, you don’t want to breathe it or swallow it. If it’s windy, you must protect nearby plants by draping them in a sheet or using a large board as you spray. Wear disposable gloves, a paper face mask like doctors wear, long sleeves and pants and a hat and simply wash the clothes after spraying. While all this sounds scary, it’s a lot easier than you might think. It’s rare to have to spray a second time unless you screwed up.

2) The second method is “greener” but takes longer, and is sometimes not as completely effective. It involves starving the grass for sun and cooking it to death by covering it with either black plastic or with newspapers. I recommend the plastic (though it is admittedly made from petroleum), as the newspapers are likely to blow around, need many rocks or bricks to hold them down even if you wet them thoroughly, and frankly look like heck for the month or so until you can assume the grass is dead and you can plant through it. Those who advocate the newspaper method say you can leave it there and mulch over it. We have cut holes in the black plastic and planted new things through it. And you can reuse the plastic in another area later.The third method is for weightlifters and marathoners who didn’t get enough exercise yet. Dig the sod out. We did this on our first new garden area in 1996, on a steep hillside. Took all day to do a 10 by 30 patch and the soil was seriously disrupted and kept washing down for a couple years. This is really only for small areas. You have to dig most lawn grasses out down about 3-4 inches, chop a chunk out about 12 inches square, then pound off the topsoil with a tool and compost the grass/root ball. Do this in the spring when there’s been rain recently. I did it in August during a drought once at 95 degrees and had to chop through concrete-like sod.If you’re going to leave an area of grass immediately next to a new “bed” for plants, you can assume the grass will invade it very rapidly. Again this can be prevented and should be, BEFORE you do any new planting. It should be edged and I strongly recommend plastic 4 inch edging that comes in lengths up to 100 feet. Here there is inevitable digging, as you must chop out the grass down 3 inches deep and 6 inches wide, lay the edging in place along the whole length (where your marking hose was), then back fill the dirt on either side of the edging. Don’t bother with the “stakes” they’ll try to sell you to stake the edging in place, I’ve had the stuff in place for 16 years and it never moves or heaves out in the spring without them. It’s made of recycled plastic bottles, so at least there’s some “green” aspect to it. An alternative to plastic edging is steel—very upper middle class looking, but costly and difficult to work with. Another is brick or stone edging, but beware, as you’ll be pulling undesirable plants out from between the cracks forever. And the plastic costs $25 for any reasonable edge, whereas you’ll pay a lot more for steel or bricks.

So, what are we going to plant instead of the grass and how much is that going to cost?
See Lawn Gone 3 »