Our first step was to remove nearly every plant present in the future Park. Except for 3 black locust, a couple of native maples and a white pine, there were no other worthwhile plants and the vines, bushes, and fallen limbs all needed removal. 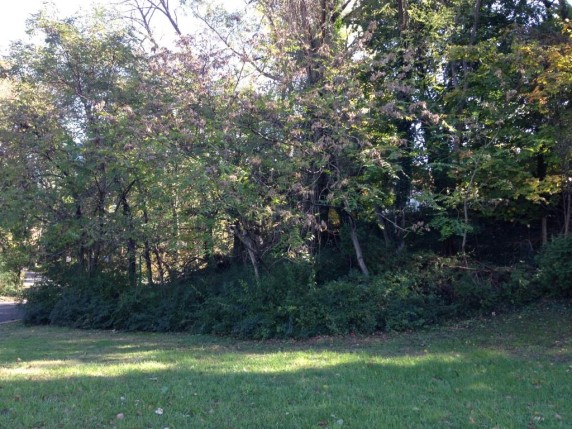 1. What could be the structure of this space?

2. What would we and other visitors wish to do in it?

3. What were our strengths and limitations, given the soil, the sun exposure, the public access?

4. With a very limited budget, how much could be hoped for in terms of large plans?

5. What would be the stages through which the project would go?

These are questions that one should deal with, whether it is a personal garden or a major public space. We got topographical maps and aerial photos from the internet sites hosted by Baltimore City and Google. It is on a busy street corner, there is a flat section about 50 by 100 feet that then rapidly rises both back to the east and more steeply south to 35 feet higher than the “plain” below. The space is seen by many passing motorists, and the foot traffic is considerable, particularly neighbors going to a food market and coffee shop nearby. So, the view for the casual observer who does not actually enter the Park is important. And, we wished to have a welcoming entry to the Park from Bellemore Road at the north.

To get started on making a Park from an overgrown lot, the first steps were to be sure we had permission to cut down trees and vines. The Board of the neighborhood was sent a summary of the history of the property, including interesting historical events that occurred within a mile of the park since the founding of Baltimore City. This started a lot of interest in the Park and led to approval for the initial plan from the homeowner’s association.

Clearing over a dozen full size trees and a large number of vines was attempted by two of us, but the job required more personpower. All the hand-movable logs, branches and vines were piled along one border of the property as a fence to deter deer from entry at least there. This has a certain organic sculptural quality and eliminated the need (and expense) to have thousands of pounds of deadwood hauled away. A utility survey was ordered to be sure that any digging we did wouldn’t encounter gas, water, cable or electric lines to endanger us or the hired workers. 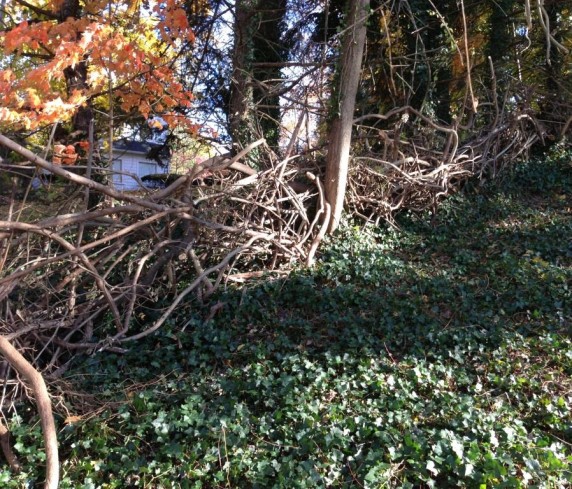 Then, 4 men with chain saw and machetes were hired to spend 3 days clearing—including digging out roots of ivy, bittersweet, porcelain berry, and multiflora rose—some of the worst invaders that would have sprouted right up again. They were still trying to make a comeback one year later, but vigilant plucking and hoeing kept them from succeeding. Now one had a blank slate. And it was late November, with no more outdoor work time easily done as cold weather approached. 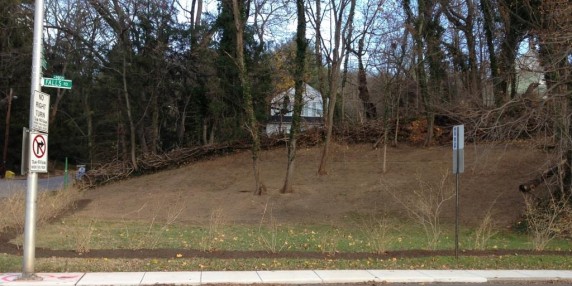 So, for the winter work, the measurements of the property and its topography were obtained from Baltimore City web sites to construct plans at 1/8 inch to the foot scale. Hardscape first and planting second. One doesn’t want to do a lot of planting only to have to dig everything up again. Due to bedrock under the sloping portions (found quickly by shovel digging), the essential shape of the hilly portion had to be maintained. So, paths on the lower and upper Park were chopped into the hillside along zig-zag courses, diverging and meeting. http://www.waytogarden.net/garden-paths-chipping-in-for-the-environment/ This work began as early in the spring as the ground unfroze after a very cold 2013-14 winter. Shovel, rake and 30 pound tamper made paths 3 feet wide, with turns sufficient to bring a wheelbarrow up easily. 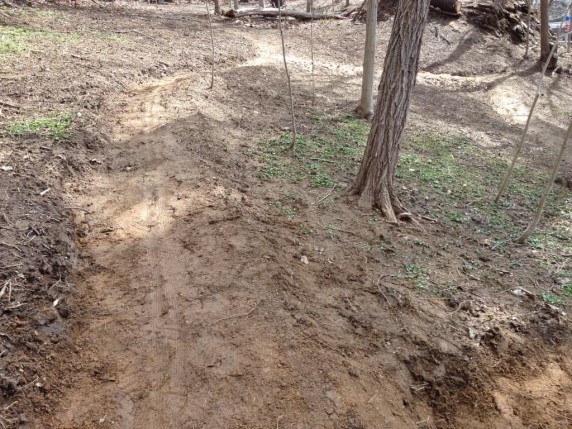 It would have been at this time that utilities should have been put in, if the funding were in place. Water especially—but there had never been a water line put into the property, and the estimate was well over $15,000 (from a good friend who does the work and gave me a low ball estimate). So, the two nearest neighbors were approached, shown the plans, and happily they agreed that a Park next to their property was a very good deal. Both allowed their hose line to be used for the modest watering that would be needed for the first year, and in future for the newest plants. Once established, native plants would need water only in severe drought. Electricity in the distant future might be fun to have—for water features, lighting, etc., but that also was pricey, and solar panels might be a choice when that time comes.

For paths, we used a technique that has succeeded in our own garden—get free wood chips from a tree company (arborist) dumped from their truck in a heap and spread them by the wheelbarrow load on the paths. This means that the ultimate plan had to have a “work area” where truck could dump mulch, wood chips, and bring in large plants and skids of stones. A 15 by 10 foot area was selected, near the street, and ultimately a solution found to have a removable fence segment there. Oak chips are best to make paths, they last several years, and when raw they eat up all the nitrogen, thus keeping food from weeds, and becoming a soft, permeable surface that minimizes erosion. That was a real issue as our 35 foot elevation along the hill had serious runoff in hard rain. 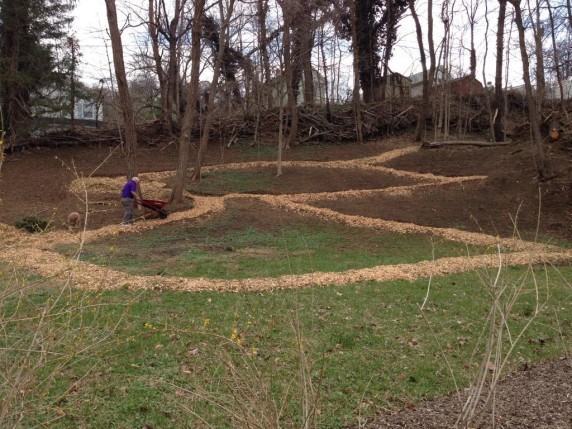 Watching the sun exposure during the fall, winter and spring gave a good idea of which areas would be better for various plants that either like sun or hate it. We have both deep shade and full afternoon sun and everything in between on the ½ acre. We invited several experts, who are also friends or persons working on similar projects in the area, to look at the property and give advice. Naturally, they might usually have charged for real plans (some did offer that), but we had no real budget at the time. Our daughter, training as a landscape architect and an experienced naturalist, had great suggestions and knew the questions we should be asking ourselves.

What is the natural character of the space? What sights and sightlines are there, and what should they be ultimately? How does light affect the space through the day and the seasons? What movement of people through the space is planned? What are the sounds of human and natural activity? How will plantings enhance the experience of being there? What activities will people do in the Park and how can they be incorporated? What negative features or possible problems can be avoided?

Next, we were ready to decide on trees, shrubs, perennials and groundcovers.